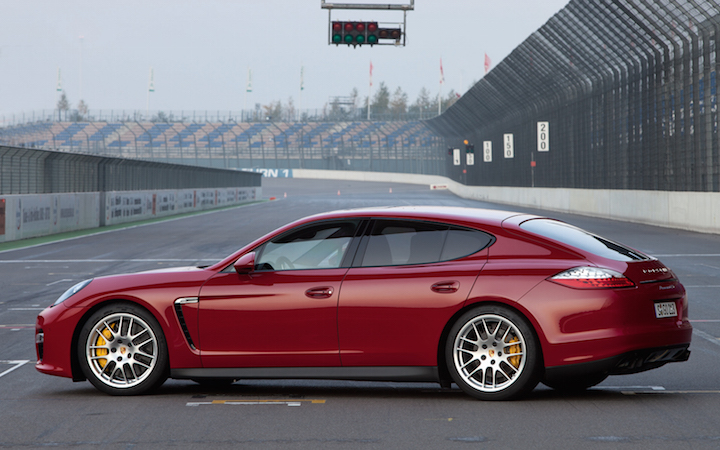 If you’re part of the crowd for which Porsche is equal to a 911 and you’ve looked at the 911 market lately (or for that matter at any point during the last 10 years), you’d be forgiven for thinking that unless a 911 is already safely stored in your garage, the train has left the station. But while that is indeed true in the case of classical 911’s up until the 996, it’s slightly less true for later 911’s and very much less true for the other models in the Porsche line-up, which today make up 85% of the company’s production. Today we’ll talk about one of those models, one that doesn’t receive much attention, that was always slightly controversial in terms of its looks, but also one that in its first iteration offers an unbelievable value for money whilst being capable of transporting four adults and their luggage in a way that no other family sedan can. You guessed it – this week is about the Porsche Panamera.

Porsche’s decision to start producing other models than the 911 had been taken many years before the Panamera, notably through the Cayenne in 2002. Wendelin Wiedeking, Porsche’s visionary CEO at the time and until 2009, had recognized that many 911 owners also had an SUV in their garage and wanted to have a share of that market, something he definitely succeeded in given the Cayenne today makes up alomost 1/3 of Porsche’s production. But then again everyone doesn’t want an SUV and Wiedeking also saw room in the market for a sports sedan-coupé, whatever you want to call it, the development of which ran during the 2000’s with the Panamera finally being launched in 2009. Importantly Wiedeking was not only visionary but also tall, and this is where the most criticized aspect of the Panamera – its roofline – comes into play.

It is said that at the beginning of the Panamera project, Wiedeking set as a condition for the car that he, and thereby well-grown adults, should be able to sit comfortably in the backseats (which in the first generation of the car were two separate seats, whereas later versions had the option of a 3-passenger rear bench). This forced the designers to raise the roofline which is what gives the Panamera its strange profile and earned it the nickname “buckle whale” in the home market Germany. Add to that the headlights resembling the Cayenne and some slightly strange-looking backlights, and you get a car that in the eyes of most is not beautiful, but luckily has a large number of other qualities that you experience once inside – which is where you spend your time anyway.

It’s absolutely true that four adults travel in comfort in a Panamera, even when back passengers are over 180 cm. Contrary to many other coupé-GT’s the Panamera is a hatchback offering around 450 litres of luggage space, in addition to which the back seats can be folded. This is in other words a car that is fully capable of transporting not only people, but also their luggage. And if the exterior is controversial there is not much to say about the interior that is very nicely appointed and offers a true sports car feeling. Actually a 911 feeling, until you look over your shoulder and see the backseats. As so often a dark interior is to be preferred as it usually stands the test of time better – and make the few pieces of plastic that don’t have the real qualitiative look shine less.

The best part is of course the drive, which can be described as all the 911 feeling you can possibly get in a family car format. Going back to the Cayenne, it was at the launch said to convey the same 911 feeling in an SUV format, something all of us who have driven one know is not the case, as it can never be in a car riding as high as an SUV does. The Panamera is also a big car (almost five meters long and two meters wide) but it obviously rides much lower. At just under two tons it’s however no light-weight, making the driving experience even more impressive. Again, you won’t find a “family-compatible” car at an even remotedly similar price point (more on that below) that is more fun, precise and enjoyable. Two features that are important in that regard is opting for a car with PDK and if possible also air suspension which clearly enhances the ride quality.

The first generation Panamera was offered as two- or four-wheel drive with six- and eight-cylinder petrol engines and a six-cylinder diesel. There was also a six-cylinder hybrid but we’ll pass on that and the diesel here, as there is no doubt that the eight-cylinder is the engine that was intended for the car – just looking under the hood of a six-cylinder shows you that, as half the space is empty. Also, the only engine that has given rise to mechanical issues through the years is the 300 hp, petrol six-cylinder, so steer clear of it. The 400 hp Panamera S and 4S where offered along with the 500 hp double turbo Panamera Turbo from the start in 2009, and were complemented with the (naturally aspirated), 430 hp GTS and 550 hp Turbo S in 2011. Except for the “basic” 8-cylinder Panamera S, all other versions are four-wheel drive as standard and all except the S also come with a 7-speed PDK. I would go for one of those and basically let you be the judge of how much power you need. The GTS is in my view especially interesting, being a bit more unusual and the strongest of the naturally aspirated V8’s.

The reason you can be the judge of how much power you need is also that in the second-hand market, where plenty of Panameras are to be found, it doesn’t really make a difference. A budget of EUR 30.-40.000 will get you plenty of great candidates of all configurations, and neither the type of engine nor the equipment level make them differ significantly in price. You don’t even need to go back to the first model year as that budget will also be sufficient for the 2011 GTS and Turbo S with around 100.000 km on the clock. There is for example currently a fully-loaded, 100.000 km Turbo S in Switzerland in fantastic condition, that cost CHF 290.000 as new, for sale for CHF 37.000… 100.000 km is of course no issue for a Porsche V8, as long as the car has been taken care of, preferrably has had one owner and comes with a complete service history. When it comes to options, the more is generally the better but you should probably steer clear of the ceramic brakes that are supposed to hold a lifetime, but often need to be replaced already around 100.000 km or so – at a cost of half the budget given above.

So there we go – a slightly strange-, but also expensive-looking four-seater Porsche, four-wheel drive with ample luggage space that is a true joy to drive, for the same money as a diesel Passat. Come to think of it, it’s also far more enjoyable and much cheaper than a family XC90… Unfortunately the Panamera can do many things really well, but fitting a dog cage isn’t one of them, so I’ll have to pass on this one. If it wasn’t for the dog (stop looking at me like that!), a 2011-2012, well-equipped GTS with standard brakes sounds pretty unbeatable in terms of value for money!