With four races left to go after today’s, it’s time to do a quick pit stop and look at what we’ve seen and can still expect to see in this year’s F1 season.

To start with the most deserving, a week ago Lewis Hamilton became truly legendary in beating Michael Schumacher’s record of F1 race wins. After today, Lewis now totals an incredible 93 wins, 9 of which so far this season. He also equals Schumacher’s record for the most wins with the same team (72), and today’s Hamilton-Bottas double means Mercedes clinched their 7th constructor world title. Lewis is Formula 1’s uncontested number 1, obviously helped by driving the car that is still relatively far ahead of the competition.

If Lewis is already the de facto world champion, it’s far more contested who will finish second and third – and who won’t. Valtteri Bottas is probably the ideal second driver with Mercedes eyes. He’s loyal to the team and occasionally manages to challenge Lewis, and so far this year has won two races. The question is however rather if what Max Verstappen (Red Bull) and Charles Leclerc (Ferrari) manage to achieve in inferior cars isn’t more impressive. Even though Ferrari is improving and Charles’s results is the only thing that may save Mattia Binotto’s job as team head, they are still far from Mercedes and Charles’s driving is the only thing making Ferrari look slightly better than the mid-field teams. Max on the other hand does a very good job of scoring podium finishes, including one race win this year, and is still in competition with Valtteri for second place in the championship. Red Bull and Max is also the only constellation that occasionally has managed to challenge Mercedes this season.

Charles and Max’s relative success also make it very clear that driving skills still count and that it’s not all about the car. The last two races in Portugal and Italy were a good illustration of how far behind Leclerc Sebastian Vettel currently is, in spite of Ferrari confirming both drive identical cars. Seb had officially doubted this but also admitted that Charles is currently in another league. There is probably little hope of things improving before Seb leaves Ferrari for Racing Point / Aston Martin at the end of the season, and you have to wonder whether Racing Point don’t ask themselves whether switching Perez for Vettel was a wise move. I guess time will tell.

There’s equally little hope of Alex Albon retaining his seat in Red Bull. His oddds improved slightly last week when Pierre Gasly confirmed he’s staying with Red Bull’s little brother Alpha Tauri next year. This beats me as Alpha Tauri is Red Bull’s farm team and Pierre’s stellar performance this season with notably one race win stands in stark contrast to Albon’s total lack of results. Today in Italy, Albon then put what is probably the last nail in his coffin himself, when after a mediocre race he completely messed up the restart after the safety car phase with 7 laps to go, managing to lose the car and end up last. Before Portugal, team boss Christian Horner last had given Albon two races to start performing. The fact that he couldn’t and hasn’t been able to all season most probably means we’ll see another second driver at Red Bull next year.

Behind Mercedes and the best half of Red Bull and Ferrari, the mid field is as competitive as ever with Racing Point, McLaren, Renault and Alpha Tauri all very close, and even Alfa Romeo Racing (ex Sauber) managing to pick up points here and there. Although he’s leaving at the end of the season, Daniel Ricciardo certainly doesn’t lack motivation and looks to be finishing his short spell with the Renault team in style, something that may have been really important when Renault decided to stay committed to F1. The team won’t have much time to regret Ricciardo though, as they will instead need to focus on Fernando Alonso returning to the team he won his two world titles with . With an improving car, it will be very interesting to see what an experienced driver like Alonso will be able to achieve.

At the back of the field the most interesting is certainly the discussions around Williams, its new owners (the US investment company Dorilton), and whether George Russell will stay on as driver (apparently Nicolas Latifi has enough financial backing to be certain of his seat). Russell has done a fantastic season given what could be expected, notably reaching qualifying P2 on eight occasions (I know, but we’re talking about Williams here!) and also refers to the fact that he has a contract covering 2021. Then again so did Sergio Perez at Racing Point and that didn’t stop the team from firing him and hire Vettel instead. Perez is still looking for a new seat, and it’s not impossible that he kicks Russell out of Williams. Or maybe Perez could be the one replacing Albon at Red Bull?

As for Haas, last years’ rock’n’roll team notably thanks to the Netflix documentary “Formula 1 – drive to survive” (watch it if you haven’t!) and the charismatic team boss Günther Steiner with his unique version of German English, it’s been a sad season. The team is nowhere to be seen and not even Steiner’s swearing seem to help anymore. Magnussen and Grosjean are both leaving the team next season, Gene Haas is however said to be committed to another season, so Haas will line up two new drivers in 2021. The rumours have it that one of those may be Michael Schumacher’s son Nic… It also means that both Magnussen and Grosjean could be competing for that second seat at Red Bull, both bringing as much experience as Perez.

With four races to go after today there’s thus still some excitement left, however rather off the track given we already know that Lewis will with very high certainty clinch his well-deserved seventh driver’s title soon, with a new record in the number of race wins! Just a small point though – Lewis doesn’t have a contract for next year, which is slightly strange given how late in the season we are. Most probably he’ll re-sign with Mercedes in the coming weeks, because he wouldn’t be retiring now that he’s beaten most records, would he?

In the absence of driving, the F1 circus has still managed to produce some entertainment these last weeks. Mid-May we learnt that Daniel Ricciardo is leaving Renault after only 12 months to join McLaren, and around a week before the real bombshell was dropped, namely that Sebastian Vettel is leaving Ferrari at the end of the season. He will be replaced by Carlos Sainz Jr., and will move on to…. Right. We don’t know, even three weeks after the announcement (and waiting for that piece of news has now made this post a bit old…).

To start with the less surprising news, Daniel Ricciardo leaves Renault after only one season, in a move that made Renault F1 principal Cyril Abiteboul frustrated and speak of a lack of trust. My guess is that Ricciardo is at least as frustrated by a car that last season failed to show any kind of progress over 2018, and you have to believe didn’t give any reason to think it would be better this year. Renault didn’t deliver on everything Ricciardo was promised when joining, and Cyril should thus stop complaining and work on getting his team to perform instead.

That of course assumes he still has a team, which is far from certain given Renault’s and France’s current status. The French state owns 15% of stumbling mother company Renault, which sacked 15.000 employees last week and has seen demand rock bottom in Covid times. It wouldn’t be a massive surprise that the French state pressures Renault to pull the plug on F1, making Ricciardo’s move look even wiser. Let’s be honest: Daniel should never have left Red Bull and joined Renault in the first place. But with McLaren, he’ll at least be driving for a team that seems to be on a roll, that has plenty of money from Lando Norris’s father Adam, who seems to be slightly more business-minded than the French state, and where next to Lando, he’ll probably have a first driver status.

The far larger surprise came a week earlier with Vettel announcing he’s leaving Ferrari at the end of the season (if we end up having one), when his contract comes to an end. Given it’s unclear where he’s going or if he’s leaving the sport altogether, this has led to loads of speculation as to his reasons. It’s unclear if he was offered more than a one-year extension and on what terms, some therefore claiming money played a role. A lot has also been focused on the lack of a cultural fit at Ferrari after Luca di Montezemolo left and was replaced by the not-very-FI-loving Sergio Macchione and his foot soldier Maurizio Arrivabene. There may be some truth to both points, but you have to believe Vettel is mainly in it for winning races, not for the money. And in terms of culture, the changes didn’t happen yesterday. Vettel has been driving under new management since 2015 and there didn’t seem to be any issues until he started making mistakes. And that was after a certain Charles Leclerc joined, and regularly drove faster – and better.

If there is indeed a cultural issue, it has no doubt been complicated by the Monegasque Leclerc, a true Southerner who is fluent in Italian, both language- and cultural-wise. Leclerc is also young enough not to have demands on anything but driving his car, which he does very well. But I doubt this is fundamentally about culture. My guess would be that it’s more related to Vettel sensing he’s losing his first driver status and as a four-time world champion, maybe just not having the energy to go for it again. He has nothing left to prove, which is also the reason he may be leaving the sport.

If Vettel says on, his options are rather limited. That he would go to a smaller team with no chance of winning races doesn’t feel very likely. That basically limits it to one option, given Albon doesn’t seem to be at risk at Red Bull (and Verstappen most certainly isn’t). That would be to take the second seat at Mercedes next to Lewis, replacing Valtteri Bottas who’s been on rolling one-year contracts since joining the team in 2017. However, whether Mercedes would be prepared to open such a potential powder keg and whether Lewis Hamilton would agree to it is far from certain. It’s also highly doubtful whether Vettel, who could never challenge Lewis’s first driver status, would accept to play second fiddle to him.

The winner in all this is of course Carlos Sainz Jr, son of legendary rally driver Carlos Sainz, who did an excellent job at McLaren in 2019. By contracting him for 2021, Ferrari also completes the transition to the next generation of drivers. If Albon starts delivering, Red Bull can be said to have done the same thing, leaving Mercedes trailing behind – and making it even less probable they would engage an ageing Sebastian Vettel. The most likely option therefore seems to be that it’s “Tschüss, Seb” thanks for everything!

Arguably as a petrol head you’re quite spoiled living in Switzerland, whether in Zurich or Geneva. But even here you don’t see a McLaren everyday, and you certainly do not see two 720’s, in the same colour, parked next to each other in a street in Geneva, all that often!

Merry Xmas to all our readers, may 2019 be your best driving year ever!

The front its not as ugly as in the new McLaren F1-car.

An interesting detail, as seen on the view from above, is that the front is asymmetric.

The front is really ugly. I hope the Ferrari F14-T, to be presented tomorrow, looks better. 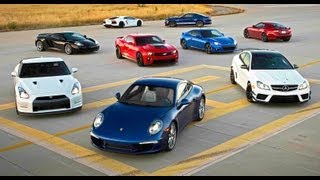 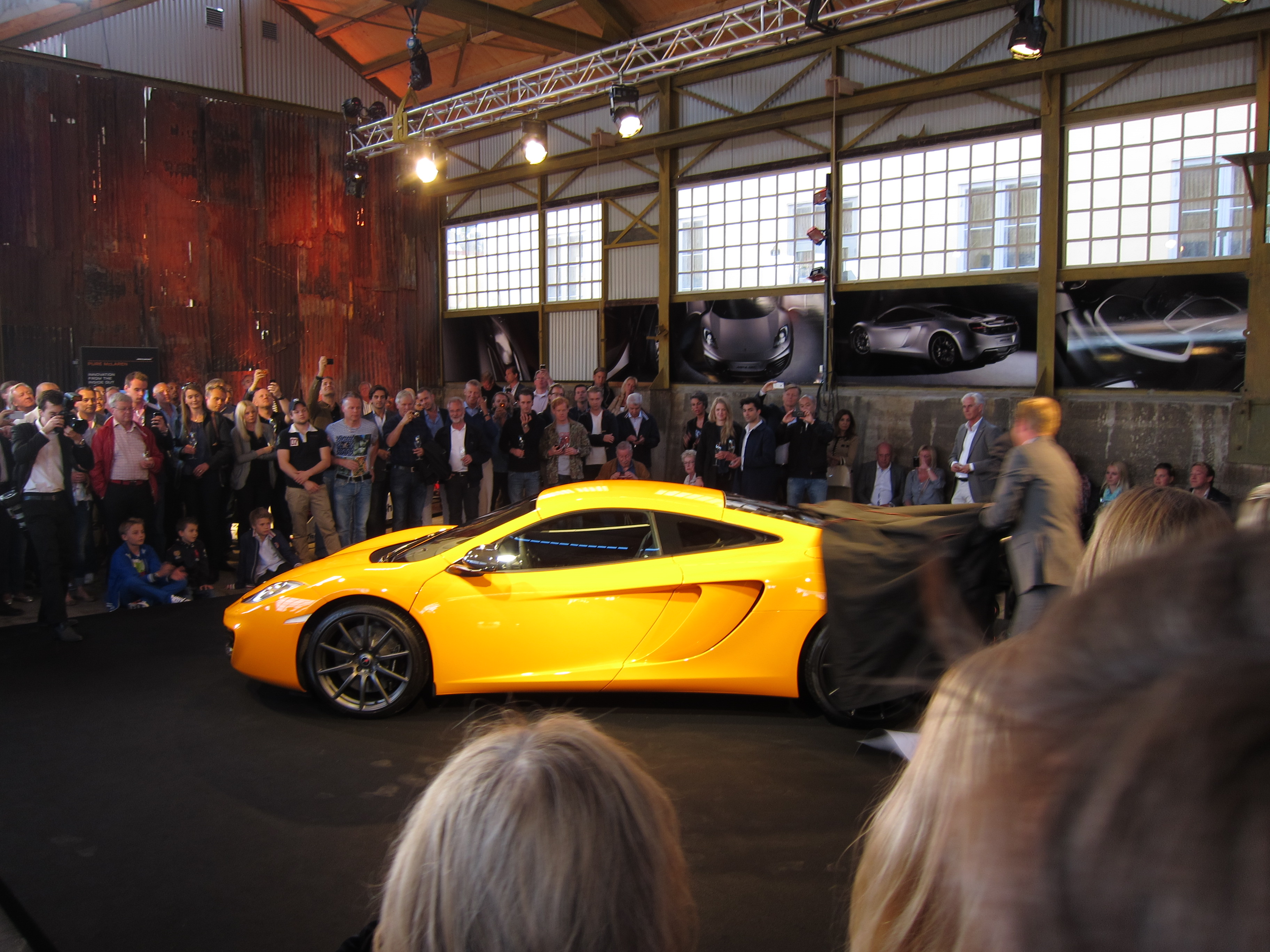 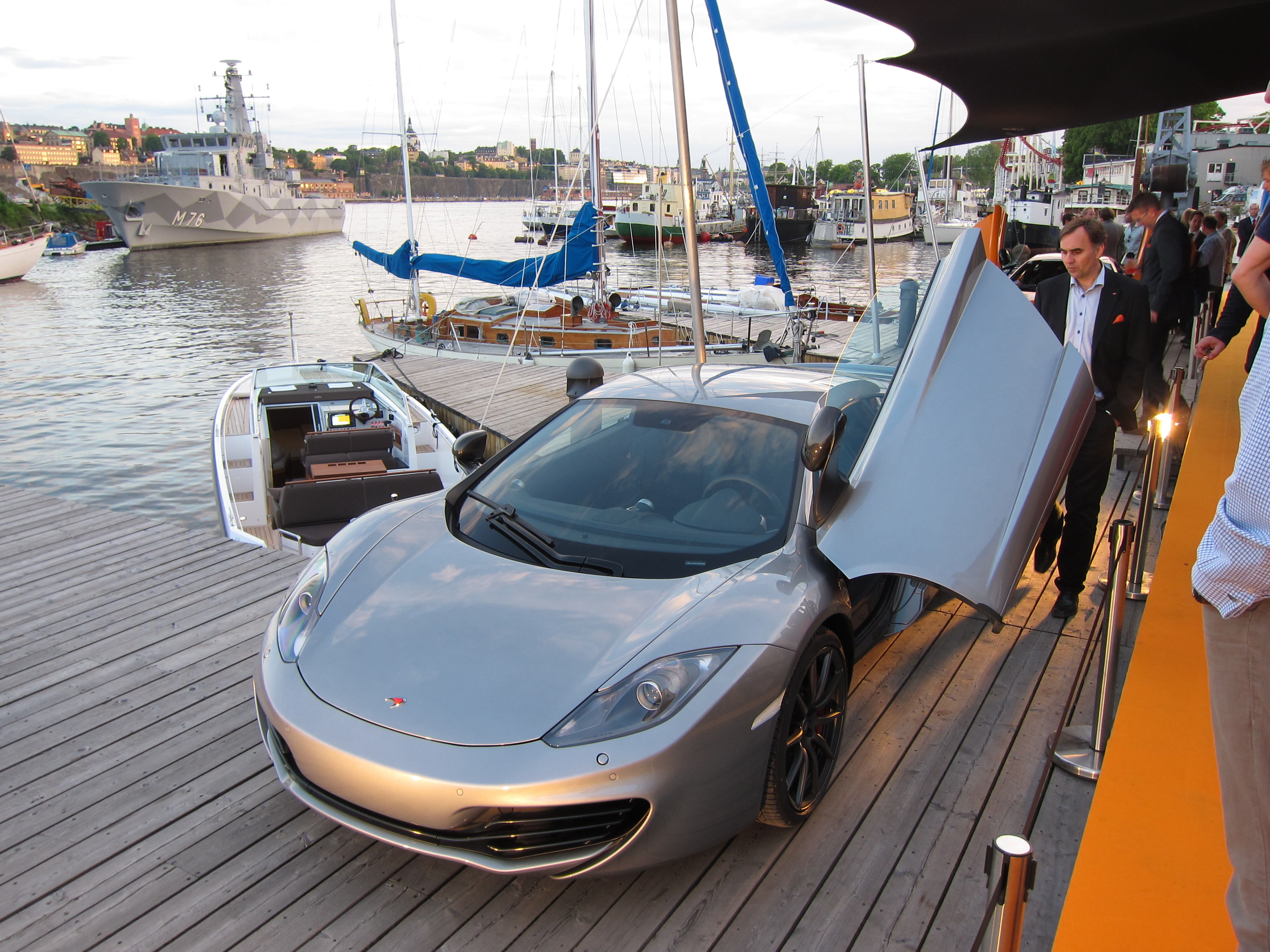 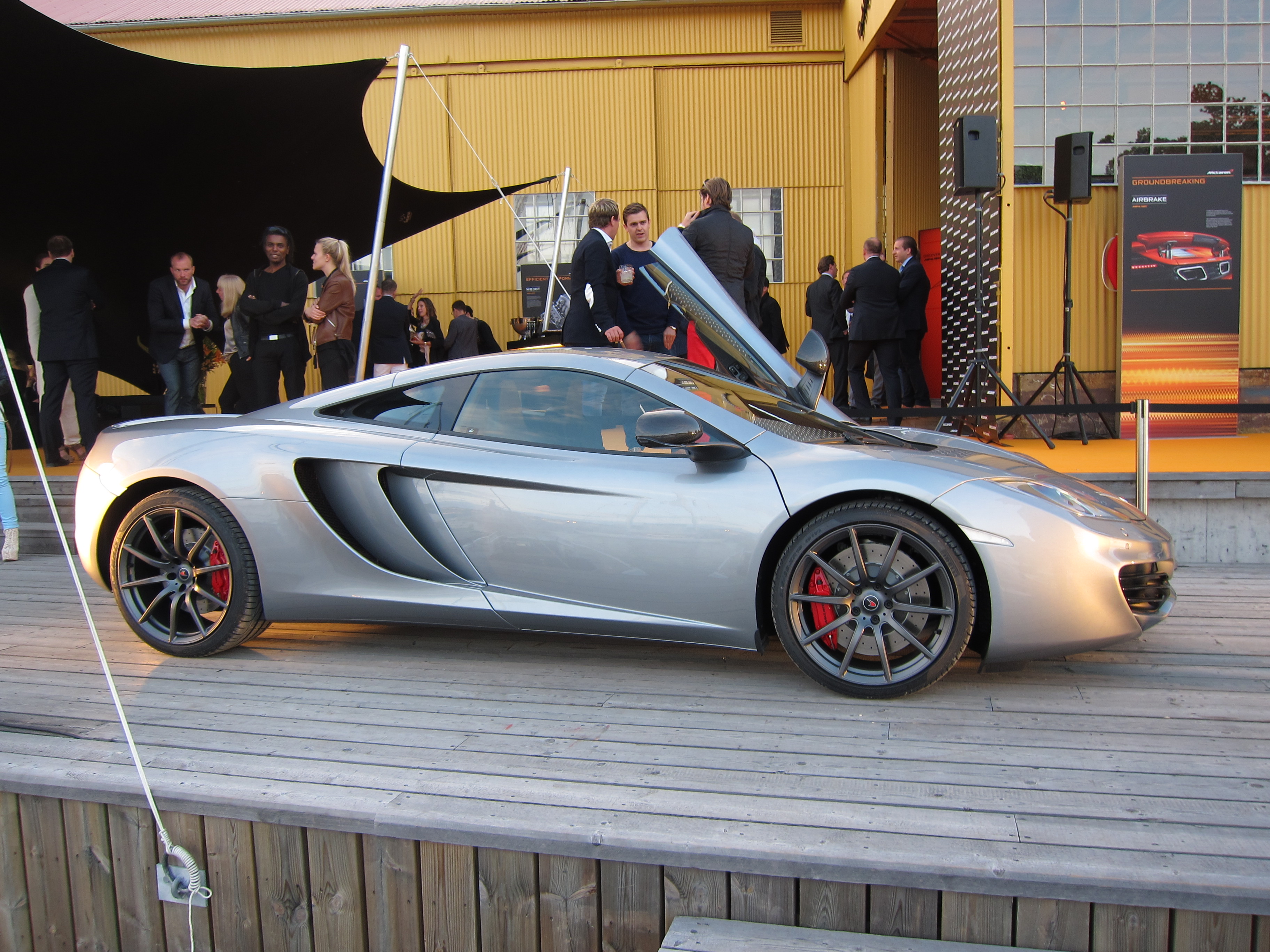 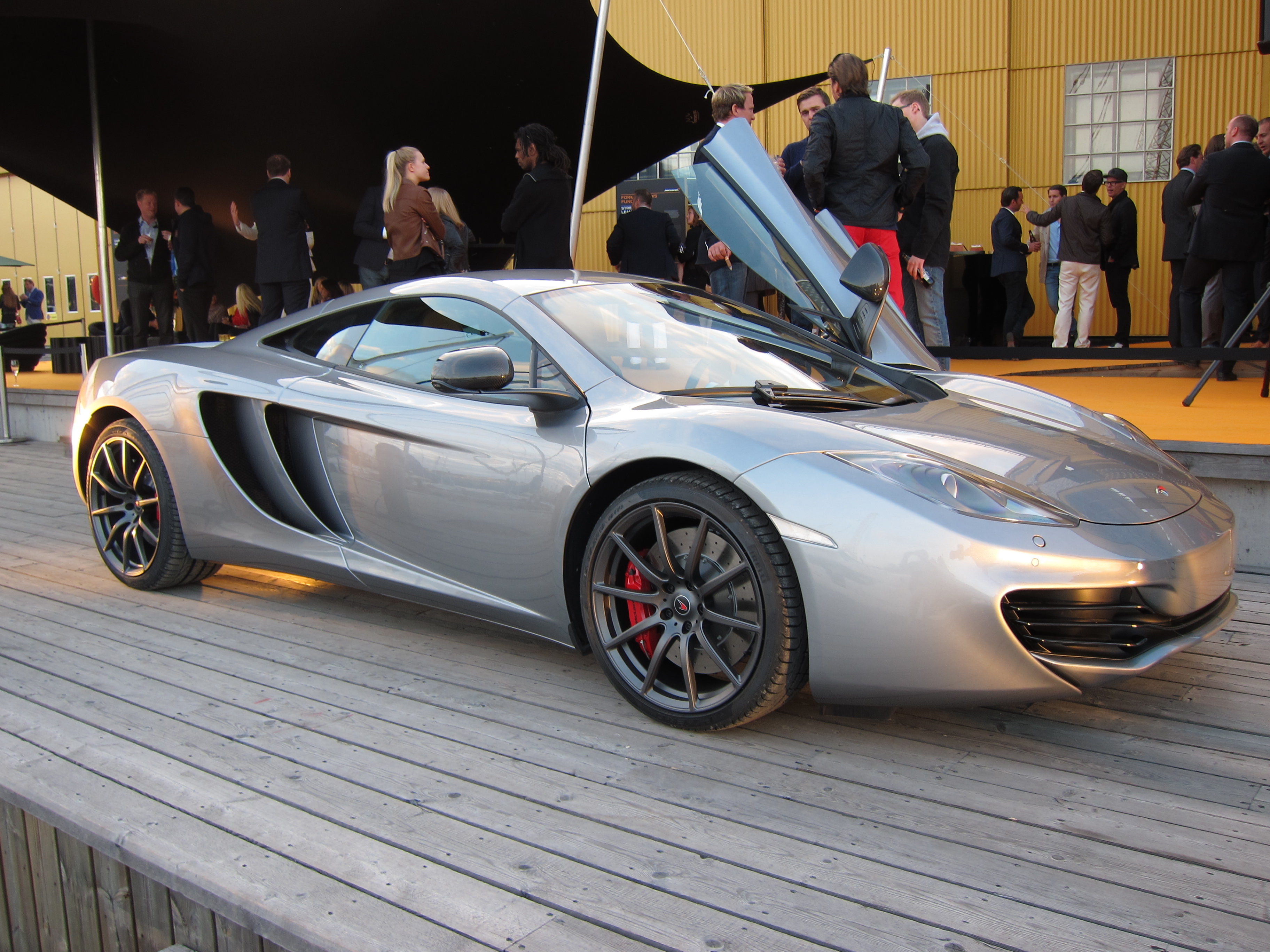 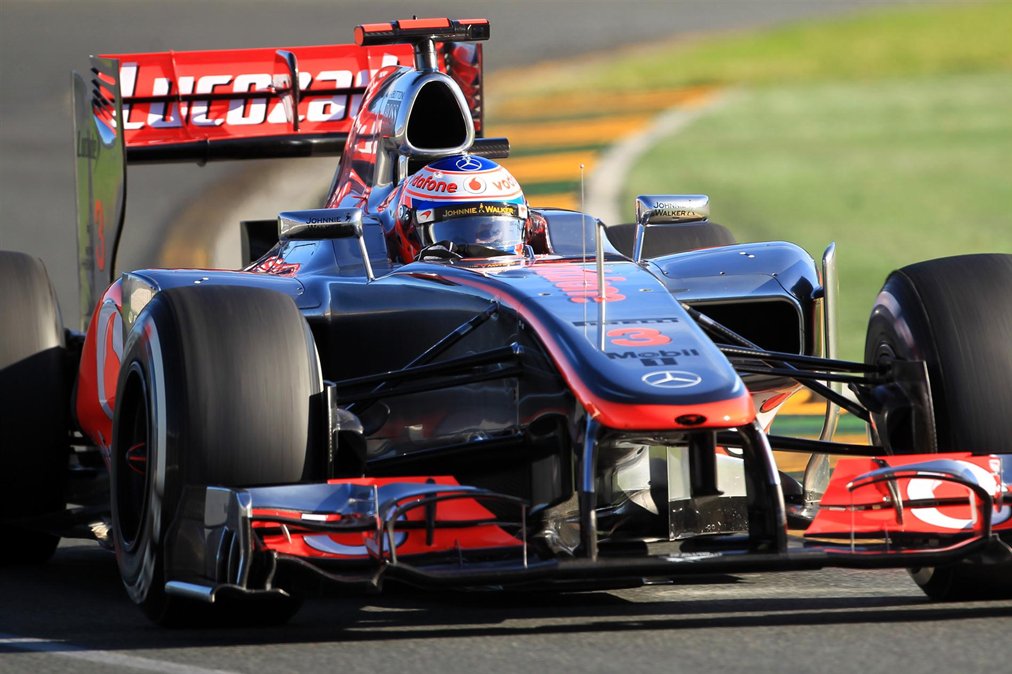