Fears that the excitement in F1 was gone forever after the sleeper we witnessed in Malaysia a week ago were firmly put aside in today’s race in Bahrain, with a wide margin the most exciting one so far this season! The excitement didn’t come from other teams having gotten closer to breaking Mercedes’ dominance – actually the contrary. But the various teams seem to have realized that there was a clear risk of the interest in the sport dying off if something wasn’t done, something that led to a healthy absence of team orders. Racing was on the menu, whether it was between Hamilton and Rosberg (Mercedes), Ricciardo and Vettel (Red Bull) or Massa and Bottas (Williams). And boy, did they take it seriously! 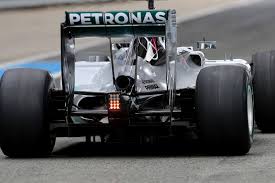 So far this season, this is a sight the other teams have had to get used to…

If you missed the race, make sure you watch it afterwards, you won’t regret it. Rather than a summary, below just a few points to summarize some of the key takeaways.

If Bahrain is a sign of things to come, in spite of Mercedes dominance, we are in for an exciting season!