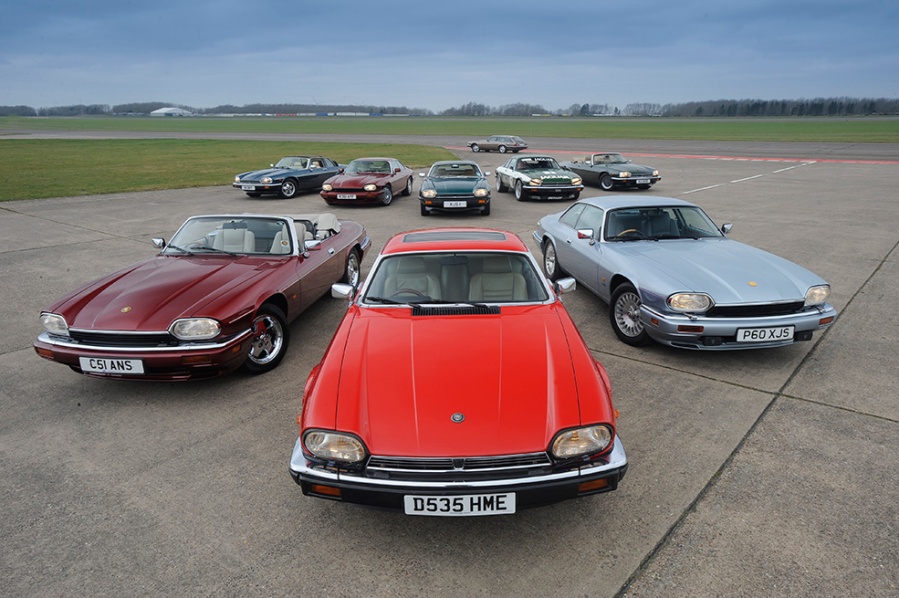 If last week was all about Italianità in all its simplicity with the lovely Alfa Romeo Spider (if you missed the post you can find it here), this week we’ll turn things around a bit and talk about an undisputed future classic, but also a car that complicates things quite a bit in comparison, and replaces pasta al dente under the Tuscan sun with rainy skies, tweet jackets and lush, green country roads: The Jaguar XJ-S (or as it was written in the last years of production, the XJS).

Long time readers of this blog may remember that I wrote a piece about the XJS back in 2016 (read it here), however that was more around its mechanical 12-cylinder engine than the car itself. Given that and also that quite interestingly, and in stark contrast to many other future classics, not much has happened on the price front in the last four years, I felt a fuller description of this true icon of English car manufacturing was called for. Still to this day, the XJS remains something of a bargain – at least in purchase price. That will most probably change in the future.

The XJS was launched in 1975 and produced all the way through 1996, in three distinct series. For a combination of factors, it was far from a resounding success at launch. Firstly, although recognized as rather good-looking, it did succeed the E-Type, one of the greatest designs of all time, which wasn’t to its favor. Secondly it was also a bit misunderstood, as Jaguar never intended the XJS to be a replacement of the E-Type. Instead they were aiming to produce a GT car, comparable to the later Mercedes CL or similar. In that they succeeded, but it took a while for the market to recognize it. Thirdly Jaguar ran into stupid difficulties in some markets such as Germany, where the buttresses behind the windows were deemed to restrict the rear view, and German authorities refused to grant the XJ-S type approval, meaning individual owners had to obtain individual road approvals for their cars – not something that boosted sales numbers… Finally, although there were other 12-cylinder cars in the market at the time, the XJS launched in the wake of the oil crisis and as you will suspect, fuel consumption has never been its strong point…

So after a difficult launch, the first series was built between 1975-1981 in around 15.000 units and was only available with the 5.3 litre, V12 engine. In the first year the manual gearbox from the E-Type was actually available as an alternative, but that was soon scrapped for the 3-speed, automatic box. The engine developed around 270 hp and made the XJ-S comparable to other V12 cars from Ferrari and Lamborghini at the time.

The second series ran for 10 years until 1991, and now a number of things happened. Next to the coupe, in 1983 a targa convertible was introduced, based on speculation at the time that the US would ban full convertibles for fear of roll-over accidents. That luckily never happened, and Jaguar subsequently replaced the targa with a full convertible in 1988, which contrary to the former became a great success. That of course makes the targa a rare and quite interesting find today, since no more than 5.000 cars were produced in total.

In 1983, the 12-cylinder was also complemented with a 3.6 litre straight six engine that was only available with a manual transmission until 1987. It produced around 230 hp as compared to the 265 hp of the V12, obviously with considerably less torque but also less fuel consumption. Importantly, in 1987 the much outdated, 3-speed automatic was replaced by a more modern, 4-speed ZF one.

By the time of the third series that started in 1991 and ran until the end of production in 1996, Jaguar had been taken over by Ford and was part of Ford’s so-called Premier Auto Group. A number of changes were done to the XJS, both in terms of design (front and rear bumbers and lights, slight changes to the windows and famous buttresses etc.) and engines. The 5.3 litre V12 was increased to 6 litres and around 300 hp, and the straight six was replaced by a 4 litre version.

Irrespective of age, there are few cars that have the same level of road presence as an XJS in a very British, understated way, very far from the screaming lines of a Lamborghini. By today’s standard it’s also a much smaller-looking car than it was initially, and its smooth lines obviously only add to the attraction. Driving it is a very similar experience. The 300 hp of the final V12 version that I’ve had the pleasure of trying are enough to make the cat roar should it have to, and steering and body roll are actually much better controlled than could be expected. Where the XJS excels still to this day is however in the smooth gliding department. It’s a comfortable cruiser, very quiet even by modern standards, and with a giant booth that will easily accommodate luggage for two. That’s also to say that the rear seats in the coupe and some convertible versions (the other ones being strict two-seaters) are not meant for humans with legs.

Whether to opt for the most common, 5.3 litre V12 version or rather one of the straight sixes is obviously a decision that can have quite wide-ranging, economic implications. There is no doubt that the V12 is the engine that suits the car best, but you could also argue that the straight six has enough power and is obviously much cheaper to own. Whichever engine you go for, a complete service history is critical – do not take any chances here! The 6-litre V12 from the Ford era has a better reputation for reliability than the previous 5-3 litre version, although both engines are actually quite solid if serviced correctly.

Coming back to the price mentioned initially, a good XJS can still be had for EUR 15.000-20.000, with top cars rarely going beyond EUR 30.000. That’s probably the cheapest V12 you can buy and gives the car a clear upward potential price-wise. As I will come back to in next week’s post however, one reason for the low prices is as so often the far higher running costs, where the V12 is a prime example. But as long as you’re aware of that and find the right car, there are very few cars that provide a similar experience. I would recommend a post-1987 car such as to benefit from the 4-speed automatic box, and if you like the styling of the third series and want a V12, then preferably a post-1991 car. The (full) convertible is the ultimate glider, but the lines come through better in the coupe. It’s really a matter of choice as the convertibles are not more expensive than the coupes. Finally, the targa convertible is the hardest to find but should be most interesting from a value preservation perspective, even though it’s also the most expensive model today.

Find the right car, put on your tweet jacket, make sure there’s fuel in the tank and double-check whether you did start the engine, given how silent it is – silent enough for your passenger to hear you whistling “Rule Britannia” as you set out on your roadtrip!

3 thoughts on “The irresistible big cat!”