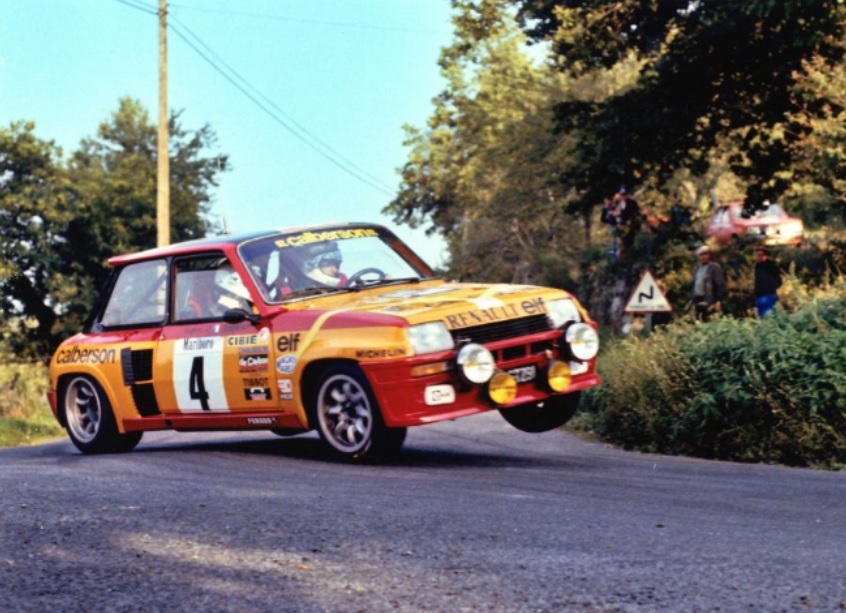 Renault is not a brand that is featured very often on this blog given, if you allow me to be a bit harsh, it mostly consists of a bunch of boring small cars and family SUV’s, that partly have some, hmm, intersting looks (Avantime anyone?) but are never associated with any kind of thrill of driving. Yeah, I know there’s a few racier versions of the Mégane that some love, but that’s never really been my thing. What is very much my thing on the other hand, is what a crazy bunch of engineers in the French town of Dieppe, traditionally the home of Alpine, developed in the late 70’s: the Renault 5 Turbo / Turbo II. And then 20 years later, also in Dieppe, a similar (same?) group of engineers reinvented the whole concept with the Renault Clio V6. This week will therefore be the story of the two siblings with twenty years between them, but sharing the same crazy concept and making them two of the if not greatest, then at least most exciting hot hatches ever!

Turning the clock back to the late 70’s, Renault had quite a strong rally tradition and had been racing the Alpine A110 for a number of years. The car was getting old though and a replacement was needed. As always the budget was a bit tight so the project started internally using the Renault 5 as basis. The R5 had been around since 1971 so it wasn’t the most inspiring starting point, but that’s before the guys in Dieppe came into the picture and did a few rather major modifications… In becoming the R5 Turbo, the R5 not only gained 20 cm in width, the engine also moved from up front to behind the front seats, i.e. mid-mounted, and the car went from front- to rear-wheel drive. The result was a body that all of a sudden looked spectacular (and still does!), an interior that was more or less untouched and thereby an ocean of 70’s plastic, and a weight distribution that changed quite radically, with around 60% over the rear axle (counting with the driver).

As a rally car the R5 Turbo and subsequent Turbo II (built from 1983, looking the same but technically improved) saw some success. It raced in the legendary Group B until the end in 1986 and won a total of three races which could probably have been more, had it not been for the fierce competition from notably Audi and Lancia at the time. What made the legend of the car was however not its rally pedigree but rather the total of around 5.000 homologation cars, split roughly as 1/3 Turbo and 2/3 Turbo II. Back in the early 80’s, at least in France this was the really cool car to have (which was good since price-wise it was on par with true sports cars!), but it was also one that required some basic driving skills, as you’ll guess from a combination of a short wheelbase, a mid-mounted engine and rear-wheel drive! The pengine’s position helped contribute to what was a great engine tone, making the 1.4 litre, turbo-charged 4-cylinder sound like far more than it was. 160 hp was not a huge power output, but with the setup as described and an 80’s ketchup turbo lag, more power was not really necessary.

After the R5, Renault went back to its slumber and the Dieppe engineers went for a well-deserved break that lasted for around 15 years. This takes us to the late 90’s when Renault presented a study based on the Clio with a mid-mounted, V6 engine. The interest was so big that Renault decided to produce the car, this time in collaboration with Tom Walkinshaw Racing (TWR). The engineers in Dieppe were back from their break and developed what was at least in concept a true follower of the R5 Turbo. As the Turbo 20 years earlier, the Clio V6 had a considerably widened body, exactly the same boring interior as the standard Clio, rear-wheel drive and a mid-mounted engine behind the front seats. This time the engine was however a naturally aspirated V6, producing between 226-254 hp. It made the V6 only slightly quicker than the Turbo though, since the Clio also weighed i400 kg more at 1400 kg. A lot of that weight was actually not linked to the Clio being a new car but rather to the heavy modifications from converting the regular Clio to a rear-wheel drive, mid-engined two-seater.

The similarity in concept also means a certain similarity in the driving experience, even if the lack of a giant turbo gap given the Clio V6 is naturally aspirated makes it, shall we say not quite as full of surprises… What remains is however the rear-heavy weight distribution combined with a short wheelbase, so being slightly careful cerrtainly doesn’t hurt. Again, both the looks and the sound are (almost) as good as the old R5 Turbo and no doubt the Clio V6 will age as well.

Under the official, very selling name Renault Clio V6 Renault Sports, the V6 was built in two versions called phases, the first between 2001-2003 and the second until the end of production in 2005. It was thus built roughly as long as the R5 Turbo, but with only around half as many produced. That doesn’t show price-wise yet with a good Clio V6 coming in at around EUR 40-50.000 whilst the R5 Turbo / Turbo II is at least twice as much. There is no objective measure in this world that makes it rational to buy either one of them, but then again rational is boring and if that’s your philosophy, these cars are both a lot of fun and not seen on every corner.

The new Alpine A110 is being built in Dieppe since 2017, a car that I covered last summer in a post you can read here. We’ll come back to the upcoming F1 season in the coming weeks but it’s no secret that Renault’s F1 team has been renamed Alpine from this season, so there’s no doubt Dieppe is going strong with hopefully some other great cars coming out over the coming years!