I recently had the opportunity of spending a full Sunday morning on Swiss country roads with as only companion a Porsche 911 4S from 2015, and I can definitely remember worse Sunday mornings. The truth is that I struggle more to remember better ones… There are a lot of Porsche aficionados among the readers of this blog with far greater experience of the Zuffenhausen greats than I do (first and foremost obviously my fellow blogger Sven), but to those of you not yet familiar with the latest 911 I’d thought I’d share a few impressions. 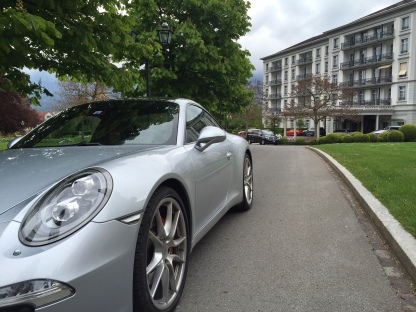 a silver-coloured coupé with black interior, a panoramic roof and the PDK gearbox. The power output was the usual 420 hp, bringing the car to 100 km/h in around 4 seconds. Obviously nowadays the boxer-six is turbo-charged even in the version without “turbo” in the name, and sure, the character of the engine is different to a naturally-aspirated six. If you look for it you will feel when the turbo(s) kick in, however power delivery remains very smooth and given the clear advantages in torque, now up to a max of 500 Nm, at least I fail to see any disadvantages with the new engine generation. That also has to do with the three buttons on the center console.

In Comfort mode, the 911 is the perfect long-haul companion, transporting two people and their luggage in utter comfort an sounding so civilized that you could trick quite a few people as to what it is really capable of. That all changes in Sport mode as the tone becomes much rawer, the suspension firms up and the fantastic gearbox hangs on to each gear longer. Had this been my car, this is probably the mode I would leave it in for everyday use. The last option is Sport Plus which, if Porsche had been slightly less serious and a bit more Tesla-like, could have been renamed something like AHBL, All Hell Breaks Loose. The mode certainly works best on track but let’s just say the sound is tremendous, the suspension is….firm and the gearbox hangs to each gear that together with the sound seem to tell you “come on, is that all you have”? Given the car was still on winter tires and the outside temperature was five degrees on a humid country road, it felt safest to answer that question by “yes, today it actually is”, but there is no doubt in my mind that with a set of sport or track tires and an appropriate piece of tarmac, this is a very potent car. So even sound-wise the new engine delivers a very convincing case.

Do I want one? Oh yes. Would this be my choice? Not certain. Although the four-wheel drive version is obviously more versatile, I remember a very inspiring drive a couple of years ago in a two-wheel drive car, so I would clearly want to try that out before deciding as it least as I remember it, it felt even more playful. In terms of power it would also be interesting to try the more potent turbo version (which would then again be four-wheel drive) – that is, if money was no issue. But sure, if someone threw a 911 4S on me, I would not mind. Actually not at all…