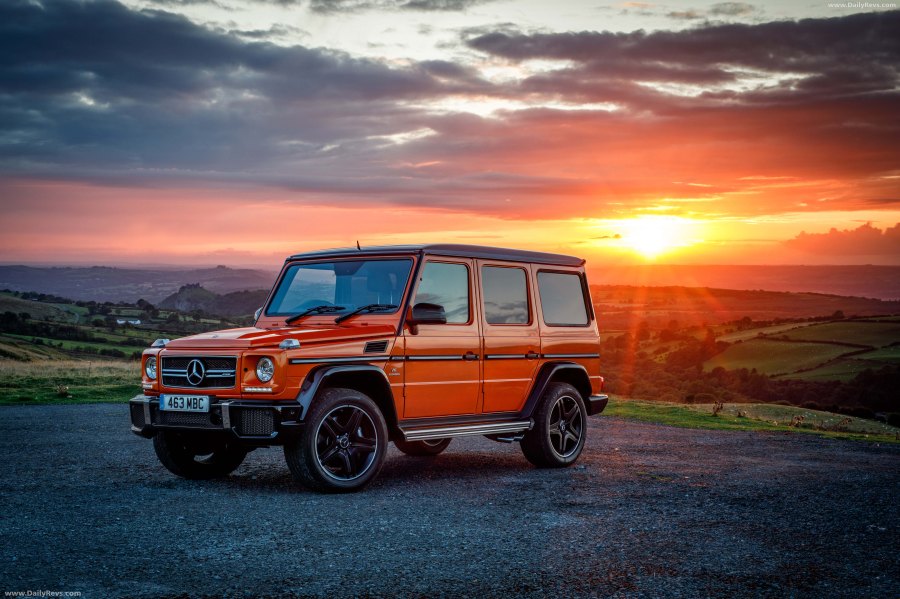 Last week was about the Aston Martin DBX and all the reasons why to me, it won’t save Aston. This notably has to do with the fact that the segment of luxury SUV’s is more contested than ever before, with new models being launched at a steady pace that doesn’t look likely to slow anytime soon, especially if you include all the electrical versions that are planned in the coming years.

Next to all these modern creations there is however another SUV that is still there, dating back to the days when this type of car was still referred to as terrain vehicle. It’s a car as popular among American rappers as with Zurich millionaires, and which costs as much as a DBX. It’s not pretty by any objective standards and about as aerodynamic as your fridge, yet it has a street presence like basically nothing else. I’m obviously talking about the legendary Mercedes G-class (G for Gelände, terrain in German), the long history of which we’ll look briefly into today before focusing on what is to some people, is a hot candidate to the title “most pointless vehicle on the road”, but to others the only SUV worth having: the AMG G63.

It’s difficult to imagine a car which saw the light of day 42 years ago, in 1979, yet where the most successful sales year was 37 years later, in 2016. That’s is however what happened with the G of which in that year 20.000 were sold, out of a total of over 300.000 cars of the original car, built until 2018. The new G-class which then came out looks exactly like the old one and continues to sell at a pace (and in spite of price) that is very surprising. It’s abundandly clear that there’s a certain magic surrounding the G and to try to understand that, we’ll start by winding the clock back to the early 70’s and the Middle East.

Mohammad Reza Pahlavi, more known as the shah of Iran, was a very powerful and wealthy man until he was removed from power through the Islamic Revolution in 1979. In the early 70’s he owned almost 20% of Daimler through common shares and thus felt entitled to request a few special services, such as the production of a new terrain car for his personal hunting trips but also for his Iranian border patrol. Keen to oblige but also believing it could sell quite a few of the same car to the police, firemen and other public services in Germany, Daimler started a collaboration with Steyr Puch in Austria (today Magna Steyr), a car and parts manufacturer with a large production facility in Graz where the G-class is still being built. The joint company decided to start production and the first cars were delivered in 1979. i.e. in the same year the mullahs ousted the shah in Iran. It’s therefore unclear but highly unlikely that he ever got to hunt in his new G-class. The collaboration lasted until 2000 and also explains why, until then, the G was sold under the Puch brand in a number of markets.

Initially the G was produced in a short 3-door version, a long 5-door version and a 2-door convertible. This first series had a power output of between 102 and 156 hp and was obviously very far from what AMG builds in Affalterbach. All models were however highly capable off road with three differentials compensating a lesser axle interlock than the natural rival, the Defender. The G also had a tipping angle of 38% and short overhangs. As a solid and to a large extent (still today) hand-built car, the quality has always been excellent, as has been recognized notably by the UN that uses G’s in various areas of the world. Unbreakable doesn’t equal extremely comfortable though, something the two rigid axles always reminded passengers of in the old G.

The first series was built unchanged from 1979 until 1990. We’re not going to go through all the subsequent series and engines given the car basically remained unchanged with small variations and different engines until 2018, but a highlight was the first AMG version called G55, launched in 2004 and developing 476 hp. Mercedes now started to pay a bit of attention to the G’s looks, adding a bit of plastic and spoilers here and there and thus giving the car a slightly less utilitarian look. This had the desired effect and the G started attracting a new group of more urban clients, laeding to future G’s being driven far more on the shopping miles of Western cities than in any kind of terrain. In 2011 and 2012 production of the short-wheel, 3-door version and the convertible was stopped. From then and until the end of production of the original G in 2018, the 350d was the only diesel, complemented by the two V8’s in the G500 and the the G 63 AMG, launched in 2012, and then the completely crazy, 612 hp double-turbo, 12-cylinder G65, built from 2015.

Next to these “regular” versions, the G has also been built in a variety of small series by Mercedes itself, and also been treated by various tuners, notably Brabus, adding another couple of hundred hp as if that was ever required. The more spectacular versions include the completely insane G6x6 built for the Australian Army in 2007 but these days very popular in the Middle East, and the 12-cylinder G650 Landaulet that Mercedes presented in Geneva in 2017 as a last iteration of the old G-class. 100 were built of these with an asking price today of over EUR 800.000.

As mentioned initially the G has a street presence like nothing else. Although it isn’t, it looks smaller than modern SUV’s given it stands higher. It’s the only car in production today which to my knowledge has a completely flat front window and it’s certainly the only one with wing-mounted turning indicators and visible door hinges. The thing is however that the original G drove exactly as it looked, making the popularity difficult to understand. I drove a G for the first time around 10 years ago, a 400 cdi which by then was 6-7 years old. The 8-cylinder diesel engine suited the car perfectly and the view and commanding position from the “upper deck” were fantastic. If ever there was a car that makes you feel like the king of the hill, this is the one! That’s however where the positives end. The drive itself (on tarmac) was absolutely horrific, stiff and noisy, and with fear for your life as soon as you neared a corner at any speed. I’ve never driven another car where the EPS kicks in in city driving, and the idea of having more than 600 hp under the hood as in the G65 was truly terrifying.

In 2018 Mercedes launched a completely new G that in spite of looking almost exactly like the old one is practically a new car underneath, and apparently, that was exactly the right call. The new car is slightly longer but also around 12 cm wider which makes a huge difference on the inside, the old G having had the Defender syndrome of the driving seat being very close to the door. The technical changes underneath are too many to mention but importantly include individual suspension on the front wheels and almost 200 kg less weight all in all. Finally the interior today looks like any modern Mercedes SUV with the MBUX screens and the rest. The top version is now the G63 with the 4-litre, 585 hp double-turbo AMG V8. This is also the most sold versions and the one everyone wants, and that both the diesel G350d and the V8 G500 make more sense objectively seems completely irrelevant. And if 585 hp is still not enough, you can still take your new G63 to Brabus who for an additional EUR 100.000 will increase the power to 800 hp and rebuild the interior according to your wishes.

A drive in the new G63 is nothing like the old one. The positives are still there – you do really feel like you’re above everything and everyone else, including other SUV’s. The grunt from the side pipes is just wonderful and the acceleration feels absurd as it takes the car to 100 km/h in less than 4.5 seconds. The ESP is still there and is still needed although it intervenes far less than before. Also the car is really well isolated but if you drive something that looks like a fridge at highway speeds, you will have more wind noise than in a more aerodynamic form. Given however how it’s used these days the G63 does the job as well as a modern SUV, and with tons of more presence. And should you, God forbid, venture outside of a city center onto something like a terrain road, you’ll soon discover that the car is still hugely capable and in that sense, still a true terrain vehicle. You may however have to switch those 22-inch, high-speed tires to something with a bit more rubber before doing so.

If a G63 is your thing you’ll quickly notice something else about it: it has some of the best resale values in the world. A 7-8 year old G63 with more than 150.000 kms is still around EUR 70.000, and the new G’s from 2018 and later have hardly lost any value at all. Mercedes doesn’t limit the number of cars produced but the production takes time given the manual part, meaning there’s quite a long wait for new cars. In 2018 this actually led to available cars being sold at a premium, something that doesn’t happen often with “normal” cars. The unique feel and presence but also the incredible solidity and quality the car oozes of make it understandable why, if you have the money, you would actually spend it on a G63, and financially given strong resale values, it would actually not be completely unwise. The old G is of course much cheaper but there’s a reason, so if you’re thinking of it, then please test drive it extensively to make sure that it’s really your thing. You’ll have none of these worries in the new G. It will never make any rational sense buying this or any other 500+hp SUV such as the DBX, but then again, rational was never fun – the G63 is!