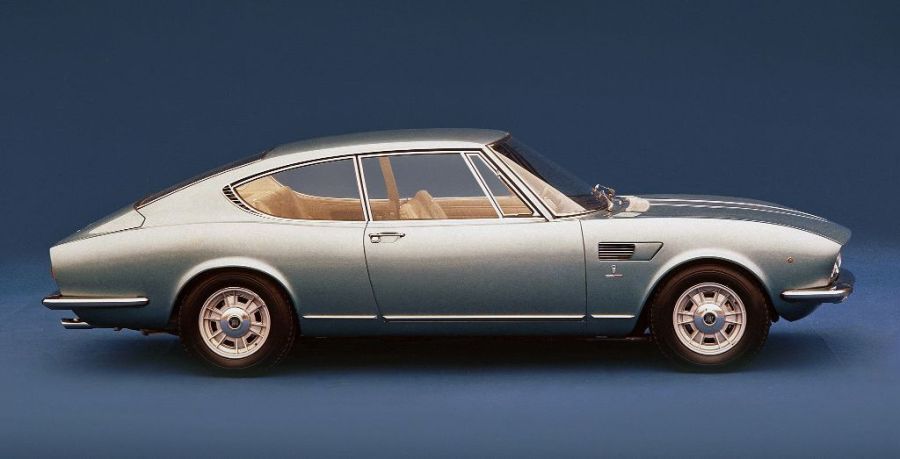 it’s time to leave the world of over-powered and over-priced SUV’s and return to a more traditional, and dare I say classy thrill of driving, which after all is what this blog is all about. We’ll do so by going back to a theme that I explored almost two years ago in a post entitled “The best Ferrari is a Maserati”. The reference here was the Maserati Coupé from the early 00’s, equipped with the brilliant 4.2 litre, Ferrari V8. The coupé is however not the only way to profit from a Ferrari engine in a car of a different – and usually cheaper – brand. Another example of that was the breathtakingly beautifful Fiat Dino Coupe from the mid-60’s, one of the highlights of that decade and a car we’ll look closer at today!

It’s the early 60’s, the Vietnam war rages, the mini skirt is the latest fashion and Americans are told smoking is dangerous through warning labels on cigarette packages (Europe wouldn’t get these for another few years). Our American friends however also had the Mustang whereas in Europe the English drive Minis and the French the eternal 2CV and the clever but not very beautiful Renault 4. Design-wise therefore, you had to go to Italy to find the true masterpieces (yep, some things don’t change!), and south of the Alps, Fiat is planning for an upmarket GT coupé and convertible, without having a suitable engine to power it.

Further east in Maranello, Ferrari’s world is a little less rosy. Enzo is still deploring the loss of his son Alfredo (“Dino”) in 1956, only 24 years old. Dino was credited with the development of the Ferrari 2-litre V6 engine that over a few years had been used in various racing cars. Ferrari now needs precisely this kind of engine, i.e. no more than 2 litres and 6 cylinders for its Formula 2 cars, but the engine needs to be homologated through serial production of at least 500 units. At the time this was too much for a small manufacturer like Ferrari and it was therefore agreed with Fiat that they would build the homologated engine and also be free to use it in future Fiat cars. Contrary to what Enzo Ferrari had wanted, Fiat insisted on the engine being built in its Turin factory and not in Maranello, meaning that the Dino engines in cars like the Ferrari Dino 206 and 246 will have the Fiat logo casted somewhere on the motor block. Fiat now also gives the green light to Bertone to design the coupé and to Pininfarina to design the convertible. This was of course not very logical and led to the two cars looking rather different with most people (including me) agreeing that Bertone did a better job – judge for yourself. The convertible was introduced in 1966 and the coupé a few months later, in 1967.

The Dino engine was indeed quite special. A 2-litre V6 with an alloy block, it’s most famous for its unusual, 65 degree angle but also features quad cams and triple Weber carburettors, bringing the output to 158 hp (and also the need for a specialist to make sure those Webers are aligned as they should be!). The face-lifted engine that came in 1969 when homologation was no longer an issue was increased to 2.4 litres and was the world’s first serial engine with electronic injection. Power increased to 180 hp with notably improved torque, and all this was fitted in a magnificent coupé body with flowing lines, an aggressive front with a big grill, and a sweeping, lower rear. I owned a Fiat 124 Coupé from 1965 a few years ago which was also designed by Bertone and the similarities are clearly there but the Dino is a larger, more elegant car. The interior matches the exterior in a plush combination of leather (one of few options but a feature on many cars) and wood with a thin, large steering wheel. The gearbox is five-speed, there are dual-circuit disc brakes all around and even electric windows (still quite rare in Europe at the time). Even though the later 2.4 litre engine has more power and greater torque, enthusiasts will often tell you the smaller 2-litre is actually the sweeter one to drive. The later car was however also updated notably with independent rear suspension, improved brakes and some othe features making it a more modern car.

Around 5800 2-litre and 2.4 litre Dino coupés were built between 1967 and 1974, with latter cars being assembled not in Turin but at Ferrari’s plant in Maranello. Of all these, few remain today and although only around 2000 convertibles were built, these are easier to find than the coupé. That hasn’t meant they haven’t gone ballistic price-wise though, with good convertibles today costing at least EUR 150.000, and the 2.4 litre being even more expensive as only 400 were built. A good coupé will still be yours for somewhere around EUR 50-60.000. Unless you have a very firm idea of what you want, the individual condition of the car is probably more important than which engine it has. One of the few available options was metallic paint and the dark grey metallic you can still find some cars in is to me the colour which really highlights the car’s beauty!

The most beautiful Dino in my eyes indeed carries the Fiat badge (except the one in the picture above…) and to finish where we started, even though they’ve gone up in price in the last years, a Fiat Dino Coupé is still more than EUR 300.000 (!) cheaper than a Ferrari Dino 246 with the same engine! That’s of course an even more legendary car but it’s not a GT and it also doesn’t have the elegance of the Fiat Dino, one of the most beautiful cars of the 60’s. Good design never goes out of style so if there’s still room in your garage, get one while you still can!

One thought on “The beautiful Dino from Torino!”