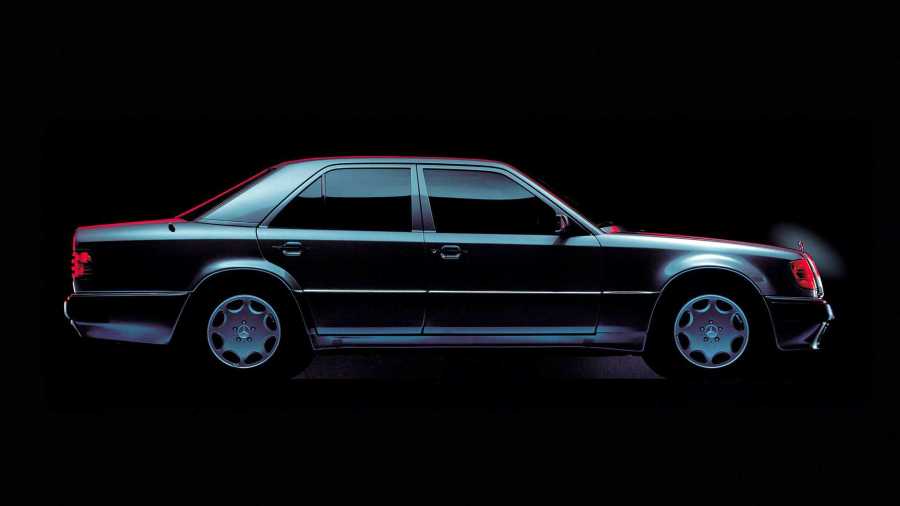 There was a time when Mercedes-Benz was led by engineers as opposed to accountants. This notably meant that a car’s price would be determined by what it cost to build and not by what accountants and even more suspect marketing people would say it should cost. Interestingly, this period which lasted until some time around the mid-90’s (a bit of an argument here) is also when MB’reached the summit of car build quality. Stepping into an MB from this period even today is impressive and conveys a feeling of something that is truly unbreakable. Unfortunately the engineers lost out to the accountants in the end and ever since Mercedes, although good, has never rached the same level of unbreakable quality as in the golden period around the 80’s.

At the time the Stuttgart-based brand was however not only well-known for build quality but also for being especially appreciated by elderly men wearing hats. Elegant, luxurious and as said with perfect quality, sure, but nowhere on the fun-to-drive radar. So if I say W124 to you (or if you prefer early 90’s E-class), chances are that you picture an owner who has very little to do with the picture that pops up in your head when I say BMW M5 from the same period. This was a true problem for Mercedes – until the engineers decided to do something about it. The end product was called the Mercedes-Benz 500 E and is still considered by some as the best car ever built.

To understand the context we need to go back to the 70’s oil crises and the fact that Mercedes had walked right into these with the big S-class equipped with two massive V8 petrol engines at 6.3 and 6.9 litres. There was an urgent need to downsize meaning smaller engines but also building a smaller car, or as it turned out actually two, the W201 and the W124. It would have been surprising for an engineer-led company to appoint a flashy Italian to design their new car, but they did. Or at least he was Italian. Bruno Sacco was at the time working in Mercedes’s safety department and most probably had no clue how legendary he would be considered as a designer a couple of decades and a few design projects later, but those that cared to look a bit closer could already in the W124 see the genius of an engineer-safety-designer at work. How exactly? Well consider the following.

It may have looked a bit boxy but with a wind drag factor of 0.26, the W124 was one of the most aerodynamic cars ever built at the time. The back lights had ribs such as to avoid snow clogging in winter. The single-arm windshield wiper covered 83% of the windscreen and its movement meant it was never lifted off the screen by the wind at high autobahn speeds. And the two side mirrors had a different shape, not enough to disturb the overall design but just enough to ensure an optimal angle and captured area on both sides. If that isn’t good design at work, then I don’t know what is. Sure, the interior was perhaps not the most inspired ever imagined, but it was oh so solid, and everything was intuitively where you expected it to be. And on the 500 E, the squared textile used for the standard seats looked even better than the optional leather.

The W124 (and the W201) thus brought the required downsizing in an attractive and almost revolutionary design. What the new cars didn’t bring initially was however something that allowed Mercedes to compete with the BMW M5 in its home market and with the new kid on the block in the US – Lexus and its smooth V8. The solution was to be found in a heavily modified and modernized version of the inhouse V8 also used in the SL. With a power output of 320-326 hp however, it also meant that many other components had to be re-inforced, and many of these were also taken from the SL. The end result was a 500 E that was wider than a normal E-class, so wide that it no longer fitted on the production band in Mercedes’ Stuttgart factory. And that in turn meant the start of one of the most bizarre production routines of any car in any brand’s history.

Notably thanks to the new cars, Mercedes stood on pretty solid financial footing at the time, something Porsche in nearby Zuffenhausen could only dream of. With an ageing 911 and massive problems to find an accepted replacement, Porsche was on the brink of bankruptcy and looking to make money wherever they could, and since production of the 959 had ended, its production band was at a standstill. Therefore, when Mercedes called (and rumour has it some local politiciants may have lifted the phone as well) to see if Porsche could possibly help putting together the 500 E, they didn’t have to wait long for a positive answer. But this was not the case of Mercedes sending an E-class to Porsche and getting a 500 E back, far from it. It’s also not the case that Porsche helped on the development of the 500 E as they did with the Audi RS2 in the same period, and as some 500 E ads today screaming “Porsche!!” would have you believe. The 500 E was a true Mercedes car, built with Mercedes parts, that Porsche helped put together – at least partly.

A regular E-class with body and drivetrain would be delivered to Porsche who would put it together, including widening the fenders ever so discretly a couple of cm on each side. The car would then be returned to Mercedes to be painted. It would then be sent back to Porsche for fitting of all the remaining parts, and after that be returned to again Mercedes for a final quality control. Sounds overly complicated and expensive? Yes on both accounts and the process took about three weeks for each car. It also contributed to the 500 E being about 1/4 more expensive than a BMW M5. The engineers at Mercedes just shrug their shoulders and pointed to the fact that this was the true cost of building the car. In a way they were right, but luckily efficiency has improved since. Quality-wise however, those who know claim that the 500 E was even more solid than a regular E-class, as if that was possible…

I haven’t had the pleasure to drive a 500 E but speaking to people who have and having indeed heard the V8 roar, I have no problem at all believing what tests at the time also said, namely that this was a true high-performance sedan that not only looked right but also drove right, thus not only beating an M5 in outright speed. It thus brought not only what people expected of a Mercedes, but also what they didn’t and which until then had only been found in Munich.

Facelift or not is obviously not where you should focus but rather on the quality of the car. Yes, they are built to last an eternity, but many have also been driven a good way towards that eternity so a complete documents and a regular service history are essential. Bringing a Mercedes expert (an engineer perhaps?) to check the car is certainly not a bad idea. After all, the engineers who built this masterpiece wouldn’t expect any less. And of course they would also assume that the car had been regularly serviced in an approved garage. If that’s indeed the case, the 500 E is a car it’s really difficult to go wrong with. It’s also the last real power sedan from Mercedes own factory, as these would be built by AMG going forward. Not more than 10.469 (out of 2.5 million W124!) 500 E / E 500 were built and irrespective of their underlying quality, many have obviously disappeared since. Is it the best car in the world? That’s as always impossible to answer, but to me it’s clearly the best performance sedan of its era. Do I want one? Jawohl!!

PS. A couple of hours ago, Max Verstappen became the new and the first Dutch F1 world champion after a very intense and in the last part, completely crazy season. Congrats Max, I’ll come back with a season summary next week!

One thought on “The world’s best…. car?”